The Melbourne University Cricket Club was founded in 1856, just three years after the University itself opened. 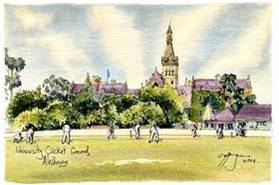 The Melbourne University Cricket Club was founded in 1856, just three years after the University itself opened, and has been a competitor in District – now Premier – cricket since it was inaugurated in 1906-07. The eligibility rules, which basically allowed only enrolled students to play for the Club, and which have now been abolished, usually meant that no matter how talented a team University fielded, it lacked the experience needed for ultimate success in the tough District competition. However, in its long history MUCC has won three 1st XI Premierships (1928/29, 1990/91, 1995/96) and one ‘unofficial’ premiership (1942/43). It has been runner-up four times and has participated in the finals a further fourteen times. In addition, the Club has won the Club Championship five times (1964/65, 1995/96, 1997/98, 1998/99, 2007/08)..

Over the years many great players have passed through the Club. Earlier last century MUCC players Dr Roy Park, Dr A. E. V. Hartkopf, E. L. a'Beckett and K. E. Rigg, all represented Australia in Tests, the last two while still students. After World War II many more Test and first-class players at some stage called Melbourne University Cricket Club home. A singular achievement was recorded in 1951-52 when Colin McDonald and George Thoms opened the batting for University, for Victoria and for Australia. In 1964 Bob Cowper, who had captained University only a couple of years before, made his Test debut against England. Cowper held the record for the highest Test score made in Australia (307 vs. England) until Matthew Hayden passed it with his 380 against Zimbabwe. In 1968 Paul Sheahan, former Headmaster of Melbourne Grammar School, made his debut for Australia (vs. India at Adelaide) while still a Melbourne University player. Another player from the ’60s and early ’70s, Jim Higgs, performed excellently for Melbourne University before going on to Test selection in 1978 and eventually becoming a Test selector. In the mid-’70s two more Test players-to-be, albeit for England, represented Melbourne University: Graeme Stevenson and one Ian Terence Botham. Unfortunately, neither gave much indication while at the Club of the international honors which lay ahead.

Some time earlier, in the early ’60s, the former England express bowler Frank "Typhoon" Tyson had been captain-coach of the Club. He was succeeded by another former Test player as coach: George Tribe who played for Australia in 1946/47 and subsequently was an outstanding all-rounder for Northamptonshire in English Country Cricket.

Most recently, MUCC legspinner Fawad Ahmed made his Victorian first-class debut (2012/13), becoming only the third player on debut to take five wickets in an innings and the first in more than 50 years. His match figures of 7-162 were the best Shield debut for a spinner since 1971-72, and his talents were rewarded with selection in Australia A Tours to England, Zimbabwe and South Africa in 2013.

In addition to all the foregoing, others considered to be at the forefront of their fields were also First XI players at MUCC: Professor Manning Clark, one of this country’s leading historians; Professor Greg Mundy, one of the world’s leaders in research into myeloma; Professor Richard Smallwood, formerly this country’s Director of Health; and many who have made their mark in the law such as Bill Gillard, David Ashley and Tom Wodak.

On the administration side, Ray Steele and Malcolm Gray stand out as being among the best administrators Australian cricket has had. Ray - a former Richmond VFL premiership player under Jack Dyer - played cricket for both Melbourne University and Hawthorn-East Melbourne but made his mark in cricket as an administrator second to none in the world. Every year now Melbourne University's match against Hawthorn - Monash University (as that club is now called) is played for the Ray Steele Trophy. Malcolm was universally praised for his work as Chairman of the Australian Cricket Board. He was a hard and efficient worker for Victorian and Australian cricket and brought further honor to himself and the Club when he was elected some years ago president of the International Cricket Council – not bad for a former MUCC 4th XI captain. Malcolm is now patron of Cricket Victoria, replacing the late Bob Parish. Before Ray and Malcolm, former MUCC President, Dr. Allen Robertson, had been Chairman of the Australian Board of Control (the forerunner of the ACB and the Board of Cricket Australia), holding this position during the infamous “bodyline” series. In more modern times Tony Steele, Ray’s son, after being president of the Club for seven years, moved up through the ranks to become one of Victoria’s three representatives on the Board of Cricket Australia until 2008. In addition, James Sutherland, dual premiership player and former coach of the Club, is now the Chief Executive Officer of CA. At VCA level the late Bill Tickner, president of MUCC for 14 years, was also held in the highest esteem, especially for his work in junior coaching schemes during his 32 years as a Melbourne University delegate. In 2012 Geoff Allardice was appointed General Manager of Cricket Operations at the International Cricket Council.

Away from cricket, former MUCC President Ron Steiner was General Manager of Rugby Victoria (having been for many years a respected Cricket Australia Executive), while former batsmen Geoff Miles was, for a number of years, CEO of Soccer Victoria and CEO of the Melbourne Victory.

No account of MUCC, however brief, would be complete without reference to Ernie Cropley - curator extraordinaire and, at various times, committeeman, vice-president, chairman of selectors, barman, cook and father-figure to generations of University cricketers. In retirement Ernie continued to support MUCC in every way possible and was patron of the Club right up until his death in 1997.

The most recent chapter in the Club’s history is prior to the 2008/09 season its merging with the Melbourne University Women’s Cricket Club, making it one of the trail-blazers in implementing Cricket Victoria’s policy of integration.

Melbourne University Cricket Club’s contributions to Victorian and Australian cricket on and off the field have been many and seem sure to continue.